The industry is abuzz in anticipation of the new capabilities and services that 5G mobile networks will bring to the media and entertainment industry, and evidence filled all halls at NAB this year. The South Upper hall played host to the Destination 5G theatre where numerous talks with an emphasis on the consumer opportunity without losing sight of the possibilities in the enterprise domain. 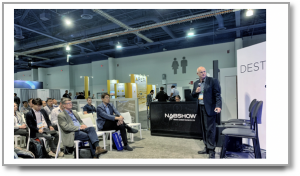 Paul Higgs, VRIF President, kicked the talks off with an overview of VR Industry Forum, the state of 360 degree video as a virtual reality medium and the benefits it brings to both it’s members and the immersive media industry. He then looked at some of the challenges still being faced in the production and distribution of 360 video and how 5G, sometimes with assistance from network edge computing, could be used to overcome them. These include the use of the low latency aspects of the 5G network to enable a responsive interaction with the network edge servers to provide only observed viewport in the highest possible quality, and the possibilities of using wireless connectivity to replace the reliable wired interconnections used today. He concluded with a glimpse into the areas in which the VRIF is looking to bring new guidelines and best practice recommendations such as the capture and use volumetric assets, engagement through social VR enhancements as well as content protection for high value material.  (presentation) 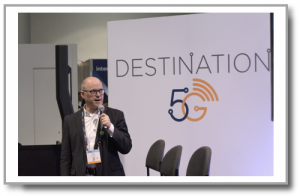 Per Fröjdh from Ericsson brought us some of the actual reality behind 5G and the mobile network evolution that has preceded it. Upcoming 5G networks will have more in common with the IT networks in use today, making use of network function virtualization for hardware rationalization into software services, software defined networking to dynamically construct traffic paths and network slicing to provide differing service characteristics as needed. Per also showed how the immersive media market had played a role in defining the requirements for 5G networks and how new opportunities were opened in media production to enable a shift to cloud based media processing workflows. (presentation)

Richard Mills, Sky VR Studios, detailed the evolution of immersive media experiences at Sky from their 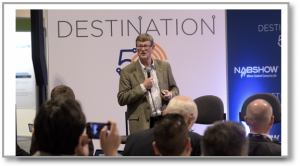 initial work with 360 degree video through to volumetric capture and photogrammetry for both interactive and narrative productions. Sky believes that 5G can bring visual and interactive enhancements to the immersive content they provide, especially smartphones become more capable enablers for the VR headset. (presentation)

5G will also revolutionise News gathering and “Fast Turnaround” programming for reality shows. High quality imagery with low latency for News “Two-way” stand-ups will become the norm, probably deploying the next generation of 5G Mobile phones rather than current “heavyweight” broadcast cameras. Reality shows will exploit the higher upload speeds and bandwidth to handle media from location to virtualised editorial.